We went back to California, to Salt Point State Park, this time, an area new to all four of us.

We camped in a forested area a ten minute drive from the ocean, which was the main attraction. There was a tree right on top of where we put the tent and the kids were up up and away within minutes after the very long drive. They are up above our tent here, probably between 12 and 15 feet off the ground, the little monkeys. 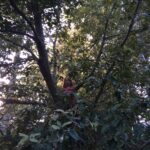 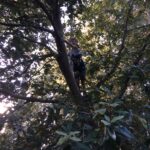 We went to the visitors center and asked where to go look at tidepools which is one of our favorite activities. Following their directions the next day we were a bit disappointed, but the following day we struck out in the other direction and soon met a family of seals as well as a plethora of really fun tidepools. I’m left wondering why they would give information about the tidepools being best in an area they really weren’t unless they were trying to keep kids from clambering on rocks and maneuvering between waves which is part of the fun and necessary if you want to see what I call “the good stuff”. Anyway, we found them, the amazing tide pools. 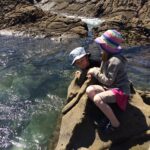 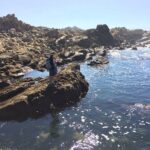 We saw hundreds of urchins,

racoon prints in the sand,

rocks that had had seaweed washed up and dried to them, then peeled off by the water or wind, revealing prints of the seaweed on the rocks in the algaed surfaces,

lots of seals, swimming, sunning, looking at us, patrolling, fishing, 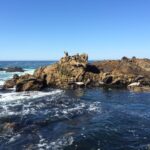 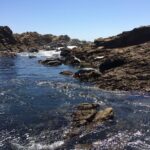 pools filled with tiny swimming orange creatures that Lilah first spotted, not sure if they were fish or shrimp or something else entirely,

mussels, anemones and barnacles, limpets and snails of course,

hermit crabs and dungeness crabs and small fish who rested in the shadows of small pools,

It’s so much fun making discoveries in the pools, and then calling everyone over to share.

Between tidepooling, which is best done at low tide, we drove down the coast to find sandy beaches that the kids love to play in the water on. One day we stopped at a beach which is well known for it’s undertow so we learned about what makes a beach safer or less safe, especially how steep the slope is under the water and breakers area. Gavin thought it was pretty cool that it was one of the deadliest beaches in California. I was a bit less thrilled and watched the kids like a hawk. Another day we stopped at a much shallower beach which had sandy areas and pebbly areas to explore. 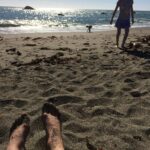 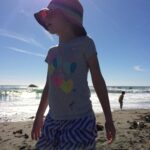 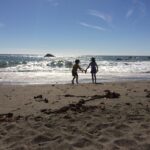 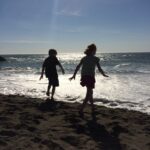 Back at the campsite the kids did the dishes, their idea, alternating who was washing and drying and who was rinsing. They enjoyed it and Chris and I enjoyed supporting their interest in helping and having time to get other things done. 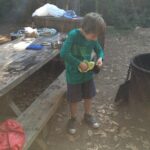 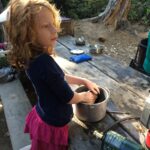 On the drive there and back we alternated between listening to music and The Witch of Blackbird Pond by Elizabeth George Speare. The kids are enjoying having ipods to listen to music that they choose, when they like. It’s fun to watch them enjoying picking out songs and bands they like and comparing notes with each other.

We had a birthday party for a 10!! year old boy with a favorite beautiful animated film with lots of fascinating mythology in it: Song of the Sea by Tomm Moore, a cooperative game of Castle Panic, showing off and making use of the several candy dispensing, coin collecting machines the kids made with Legos beforehand, chocolate avocado cupcakes with chocolate ganache and marzipan leaves, birds and flowers on top. Ten years is a long beautifully vast time, and I am hungry for every day I get to spend with my amazing children.

Lilah finished her reading journal (filling out the writing portion) and we went to Barnes and Noble to collect her free book.  She chose Princess In Black by Shannon Hale and Dean Hale which turns out to be a charming story about how people have more than one dimension and identity.  I love that the perfect pink princess turns into a black wearing, monster defeating leader in secret.  I hope it’s not always a secret that getting dirty, wearing black and fighting monsters is awesome. Several weeks on, she’s read the book at least four times. I think we’ll see when the next one comes out! 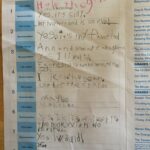 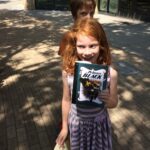 There was a hike up to Willow Lake where we found a tunnel in the willows. There was a stinging nettle plant and the kids were talking about how you can harvest it to make soup or tea and have requested we try.  When we got home they assembled a stinging nettle collection kit, with bags and gloves. Sometime soon we’ll head somewhere with a healthy nettle population. They are learning to identify many wildflowers, trees and plants which is fun for me since it’s been an interest of mine for a long time too. 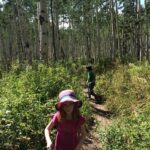 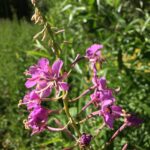 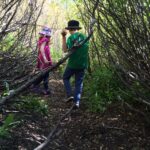 We started listening to Redwall by Brian Jacques and that’s been entertaining for the kids so far. There are so many stories about warriors or rangers or heros of any kind in fighting roles and the kids have been doing a lot of exploring that idea through role play and pretending.

We took our skates over to the park for some round and round the round-a-bout and then for some trying out the hills with skates both on and off feet. 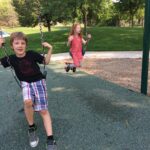 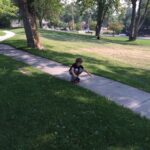 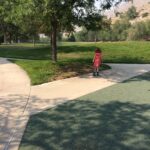 We met other unschoolers at the park for a not back to school picnic.  It was fun but hot and we got tired out after a few hours. There was a parachute to play with! 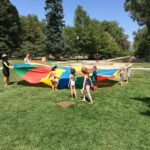 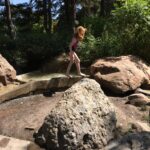 Our state legislature had a special session lately and they voted to move the state prison so we watched a video of the discussion in the legislature. The kids listened for a bit and then wandered off while I listened to the entire discussion.  Later on the kids asked questions about the prison and some other points in the discussion.

We took a family hike up to Cecret Lake. It’s beautiful up in the mountains and there are salamanders there which are so fun to watch but too difficult to get pictures of. 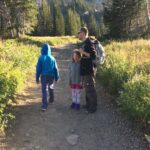 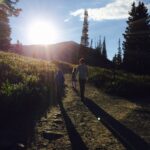 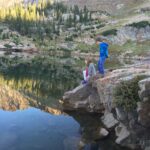 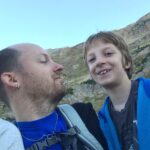 The kids have begun playing Minecraft, a computer game in which you explore a world and collect and mine and build and transform. They love playing it together and seem very excited about trying new things in their worlds every day.

Once in a while I get a chance to do something like take dramatic and metaphorical photos, which I love. Here’s one I took of my reflection with a sunset behind me in an abandoned museum. I could make up twenty stories about what it says and they could all be true. That’s what I love best about visual art. It can have multiple meanings, even at the same time and they can all be equally important or not. There is room for interpretation, feelings, questions, things that words cannot say or do say with no room for more. I liked sharing the photo and why I like it with the kids. I hope they will learn that words are not perfect, though we pretend they are.

We went for a family walk up City Creek Canyon to mark the first day of the school year.  Lilah would be in 2nd grade and Gavin in 5th, if we bothered with those labels, which we don’t. We spotted some milkweed and asked the kids what they knew about it. Gavin remembered that butterflies like those plants. I explained that Monarch butterflies need those plants to live and then we discovered some Monarch caterpillars happily munching and traipsing around in a patch of milkweed right by the trail. They are beautiful caterpillars! 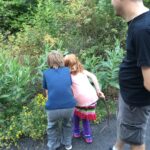 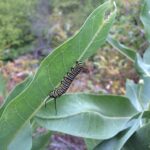 This is our “official back to school picture” taken on our walk:

I posted it on Facebook, saying “We’re kicking off another year of learning anywhere and everywhere.”  I felt like sharing and celebrating the choices we’ve made but I didn’t want to do it in a way that might make our schooling friends feel hurt so I decided to leave school out of it altogether and just talk about learning and enjoying, which is what it’s all about anyway. I wish sometimes that the moniker for what we do wasn’t “unschooling”. It is reactionary and has negative implications about other people’s choices. A better description of what I see us doing would be lifelong learning or life learning, but to connect with others and the overarching philosophy, the term unschooling is the most widely recognized label. Whatever the labeling situation may be, I love our adventures and we are amazed at how much both kids are learning and the kinds of learning they are doing. They are healthier physically and emotionally as well as coming into their own pursuits more. When I am asked how it’s going, which is often, the answer is, we love it! It’s been good.