We’ve been at the pool, working on swimming strokes together, as well as going down the water slide there. We’ve been going to the water parks too. It’s good to cool down when it’s hot outside.

They’ve been reading oh so many graphic novels and we got some fun math books to check out.

We’re working through a puzzle I got for my birthday with lovely depictions of the constellations on it. The kids and I have had several discussions about constellations and horoscopes as we look at the pictures on the puzzle. Lilah decided she doesn’t want to be a Libra. She’d rather be something that has an animal representation.

We went to a new place in the mountains with friends called Cataract Gorge, an area full of waterfalls that’s several miles down a very rocky dirt road that felt pretty exciting as we were bumping up and down. The kids played for hours in the water. Gavin hauled driftwood around to create bridges, docks, an aircarrier and a huge ship with lots of customizations (smaller sticks tucked into nooks in a large log). The waterfalls were beautiful too. 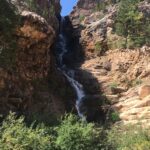 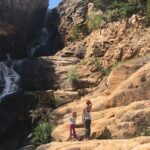 We met a new bunch of people for a Magic the Gathering club and were disappointed. The kids were mostly too young to really be able to play and the kids that were of similar ages we didn’t hit it off with. I am so disappointed about this as I was really hoping it would be a good regular activity with a group of peers for Gavin. I am considering other options for providing Gavin (both of them) regular time with kids close to their own ages.

Lilah started a Makerspace class, where she does tinkering projects. So far she’s made a nametag with LED lights as eyes and is working on a notebook.

She also tried an aerial arts class, where she does acrobatics on long silk pieces hanging from the ceiling. She loved it so much and we’ll be going back often. 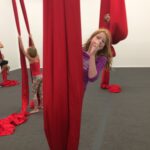 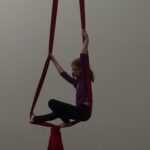 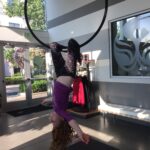 We’ve been enjoying harvesting from our garden. This week we picked two green beans, a jalapeno, a pink banana squash, several small pumpkins, cherry tomatoes, a zucchini, a handful of eggplant of various types, a bunch of lemon cucumbers and some basil and Thai basil. Yum! Lilah and I like to check the honeydew and golden melon progress every few days. The biggest melons are about the size of a kids football now. They are less fuzzy than they were. Lilah built a support for one of the honeydews that was dangling in mid air with some sticks and a rock.

Gavin’s been working on some coding, in a new class and on codeacademy.com. He really enjoys solving puzzles and is enjoying messing around with html and css. He says he likes css better because he’s interested in customizing things.

We listened to Charlie and the Chocolate Factory and James and the Giant Peach by Roald Dahl while driving. Such fun! The kids have heard them before but didn’t remember them well. I always have adored how Charlie Bucket’s grandparents have matching names: Joe and Josephine, George and Georgina. So much amusement in those stories.

Lilah’s been working on learning to play the chorus of Let It Go from the Disney film and a song from Moana as well as refining her Yellow Submarine on the keyboard. She’s getting quite good!

Gavin’s been building and rebuilding a Lego Mindstorms robot and then programming it to do different things. It’s huge and very complicated and he’s spent hours working at it. He’s really enjoying working on it. 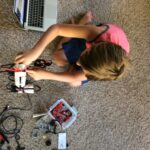 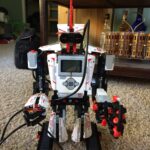 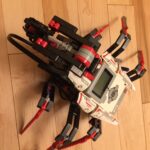 I’ve been painting a bit. I love it! It’s time consuming but I absolutely love every second even when I despise the results. It’s hard to find the time but oh, so important for me to enjoy, for the kids to see me doing (since it’s one of my big life goals, to make art) and then sometimes they join in either just watching and chatting or sometimes painting too.

I learned back in college that when I make art, most of it is destined for the garbage can. I don’t mean I hate it, though sometimes I do, but I mean it takes a lot of practice, of experimenting, of quantity to create a little quality art. And it doesn’t bother me at all now. Long ago, it really did! Now, I just enjoy the process and enjoy those projects that I value the product too. It’s the making that matters to me. I hope the kids enjoy the making in life too.

Here’s my latest work in progress. I’m still struggling with the texture of acrylic on canvas, but I’m enjoying the struggle. 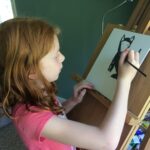 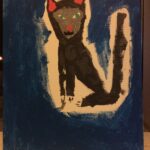