We had a lovely Halloween! We all dressed up as characters from Harry Potter. I was Luna Lovegood. Chris was Xenophilius Lovegood. Lilah was Hedwig (the owl) and Gavin was either Fred or George Weasley, depending on the minute you asked him. The kids trick or treated and then came back to Grandma and Grandpa’s to share their spoils with Grandma.

We celebrated Chris’ birthday with a first visit to a Harry Potter themed escape room with my sister and parents. We had to solve clues to find six horcruxes hidden in the space, behind locks or secret compartments that open only when you’ve gotten the riddles right. We had an hour to complete it and we just made it with less than a minute to spare. It was really fun! The kids loved it and helped significantly and it was not scary like some of the other escape rooms are. There were lots of different kinds of puzzles involved so we all got to work together. I sense a new favorite pastime coming on.

Last week we drove up to Portland for Chris to go to a conference and to hang out with friends who recently moved there. We visited OMSI where we did some science exploration and the Japanese Gardens and our friends. We got to see our friends’ new place and the Gardens were lovely with fall colors. 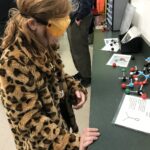 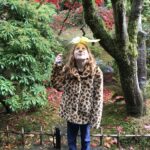 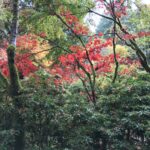 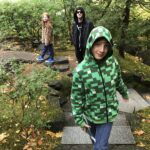 We bought a book that Gavin was interested in to bring up to Portland (a four day trip this time) and I briefly thought about getting the next one in the series too but as they are hundreds of page novels, I thought he’d be fine with the one. Well, I was wrong! He finished that in two days and so we went on a search for the next one on our trip. His reading speed has really increased lately! I love that he enjoys reading though robotic dragons and steampunk stories aren’t my cup of tea. I love hearing him tell me all about them though!

I’ve been slowly taking plants out of the garden as it gets too cold for veggies. We still had squash, tomatoes, tomatillos and peppers out there last week though. I brought in a bunch of semi ripe tomatoes to ripen inside.

Yesterday we enjoyed watching a huge hawk just a hundred yards up the hill behind our house, sitting in a big tree. Magpies kept trying to bother it, get it to move but it was happy surveying the autumn grass and emptying trees. Later we spotted another on a utility pole nearby as well. There seems to be one who likes to spend many an hour nearby and it’s lovely to watch it sitting or soaring.

Lilah has been writing songs. She has a notebook where she writes down lyrics and then I hear her early in the morning or late evenings in her room singing and then talking to herself about the next parts. She also has been enjoying playing on our keyboard.

Lilah’s been finger knitting. She’s made a scarf, two necklaces, some bracelets, a head band and some curtain ties that I know about plus likely just as much that I don’t.

We went swimming and worked on breathing while swimming.

Lilah took a lyra class and has been doing more aerial silks classes. I do yoga while she does aerials which is perfect.

We’ve been listening to the Brotherband Chronicles, The Outcasts by John Flanagan in the car. It’s so good.

Gavin is working with his Odyssey of the Mind team on a Star Wars themed challenge. They are working on a play with various characters and scenarios. It will be his turn soon to be a student leader and bring and support a short activity for the group so he’s been brainstorming about that.

I’ve been working on Halloween costumes. The kids weren’t sure what they wanted to do until just a few days ago so I’ve been scrambling to collect pieces and parts for all of us and to make Lilah’s costume but it’s fun to do even if we are on a tight schedule.

We took a hike up to Fifth Water hot springs with my sister.

It was a beautiful cool day and there were still colored leaves everywhere though a bit less vibrant than the previous week. When we go up to the hot springs the river runs blue and a bit cloudy and there are many small pools with rocks, waterfalls, reeds. We found one that nobody else was using and my sister and I enjoyed immersing ourselves while the kids dipped their feet and legs in and explored. Gavin had brought a book so he read for a while as we soaked. 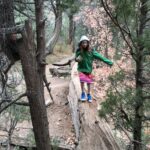 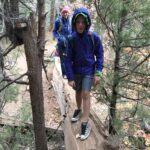 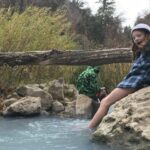 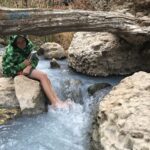 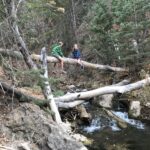 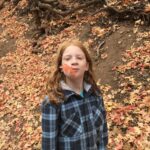 We watched a Ginormous Pumpkin Regatta, a boat race in giant pumpkins with my family. It was really entertaining. There were some capsized pumpkins and one that was so big it could barely move aside from spinning in a circle. I want to know more about growing those pumpkins. How big are the plants? How much soil do they need? Do you pick off all the other pumpkins to grow one as big as possible? How do they taste? If the growers spend up to 30 hours a week caring for the pumpkin, what is it they’re doing? I may do some research to satisfy my curiosity. However, I doubt we’ll be growing giant pumpkins anytime. The usual size kind took over our yard just fine this year. We got 4 orange pumpkins from two vines and 2 gray-green pumkins from another vine that grew from seeds in the compost. The kids are particularly excited about the green ones. 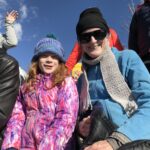 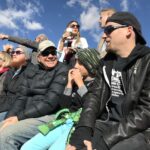 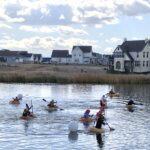 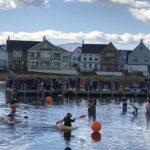 We’ve been going to a homeschool gymnastics open gym session with friends. The kids get to use the equipment and play for several hours.

One of our favorite places, Red Butte Garden, a botanical center near us and where Chris and I were married has a Halloween activity every year called Garden After Dark that we enjoy. This year it was Alice in Wonderland themed. It was really fun to hunt for gems for our key to the portal to another world, search for white rabbits and enjoy the Queen of Hearts reciting Jabberwocky. They had games like flamingo croquet and giant tea cup decorations and also fun information about plants like there are roses that change color and riddles about flowers and herbs. We had a lot of fun and came home with wildflower seeds and chamomile (tea) seeds. 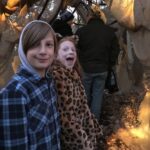 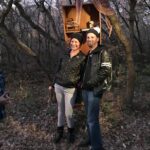 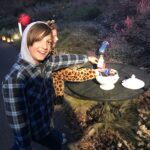 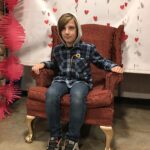 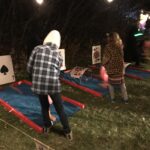