Gavin played Lego Chima on the computer.  Then they watched Pokemon and Leapfrog: Amazing Alphabet.

There was Magformers and pony play.  Then breakfast and more pony play.

“Let’s play Real Ninjago but in the real world.”  “Okay!”  They play Real Ninjago almost every day together.  It’s a pretend game based loosely on Lego Ninjago, but populated with whatever characters/environments/challenges strike their fancy that day: dragons, Pippi Longstocking, poisonous plants, slavery.  Sometimes they use toys as characters, sometimes it’s just oral.  They negotiate together and tell a story that weaves their many interests together.  It’s a beautiful thing to watch.  I’m not ever invited to play and I’m glad that it’s their world, just for the two of them.

Then we began a big project:  cleaning out and organizing the kids’ closet.  It’s mostly toys, supplies in there rather than clothes though there are some of those too.  We took everything out.  The kids loved this part as they found long-lost favorite toys.

We sorted things into groups.  We have a big pile of things to keep, another big pile of things to give away to bring someone else joy, and a few things that the kids aren’t excited about using but we will keep for other friends or perhaps Gavin and Lilah’s kids someday.  The kids did most of the work of pulling everything out, making decisions, putting things back in their places with my assistance.  I got to take several armfulls out to the recycling and garbage bins, but other than that they did most of it.  Now the closet is organized and cleaner and the kids should be able to find what they’re interested in pulling out and able to put it back when they’re done.  Woohoo! 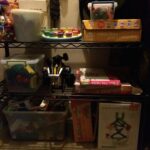 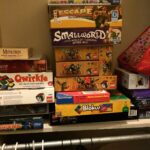 Lilah and I picked tomatillos, serranos, carrots and cherry tomatoes. 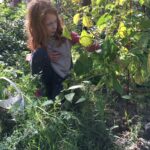 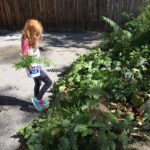 After lunch, we pulled out a bunch of games from the closet to the game shelf in our living room and put some in the closet.  It’s fun to switch what’s out.  We played with our stacking tops and then Lilah and Gavin decided to play Connect 4 and spent several hours trying different approaches and techniques. 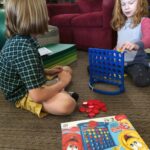 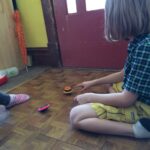 I left for a hike on my own for an hour or so.  It’s been more a struggle than I had expected to have bits of time on my own.  I find that I feel guilty, more than I used to when we were not unschooling, if I am not with the kids, even when I know it’s not a problem.  However, it’s important for me to just be alone here and there, just explore my own thoughts without interruption.  It helps me feel happier and healthier and be more present with the kids when I am with them.   I enjoyed spotting butterflies and enjoying the sights  and smells and sounds of fall.  The clouds in the sky swirled like the top of a latte when I was walking back down the road.  When I got home the kids were playing together and had the chess set out. 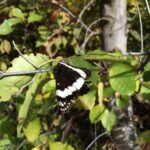 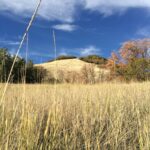 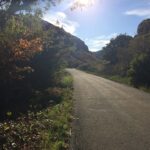 Then it was time for Lilah and I to drive to her gymnastics class and Gavin and Dad to play Civilization and make Palaak Tofu for dinner.  That’s an Indian dish with spinach that usually uses Paneer, an Indian cheese, but we use tofu instead.  Yum!