There was Pokemon watching and Coolmathgames.com playing.

After breakfast there was more Playmobil castle play.

We worked on the Lego costume some more.  We realized what we’d done last night wasn’t wide enough so we started over.  We cut the cardboard, added a neck piece, taped it together and then hot glued it.  We held it in place with a ball to keep it as round as possible.  Next we’ll either begin on the torso or we’ll paper mache the head. 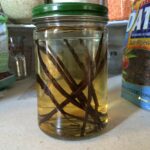 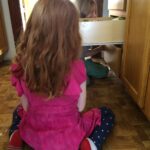 We went to the skating rink and we found they open later now so we headed back home, sewed some elastic on Lilah’s wings for her hands and then it was time to return to the rink.

We skated for almost two hours before heading home for dinner and bedtime. Every time we go, we each get a little bit better.  Gavin is now enjoying himself and getting along fast with the support.   He can also make it well along the edge or holding hands.  Lilah is able to skate on her own, though she still falls fairly often.   She enjoys using the support too, but doesn’t really need it anymore.  I am getting better at different foot patterns, slowing down and stopping which I never knew how to do.  It’s important when there’s a kid in the way and you need to avoid them or when you want to exit the rink!  So much fun! 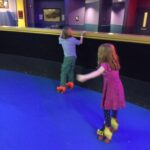 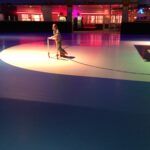 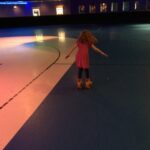