There was Katamino playing and building.  In Katamino you race against your opponent to fill your box completely without leaving spaces.  You each get a certain set of blocks.  It’s a bit like Tetris but with real blocks.  Plus, you can build animals out of the blocks after your game.  Lilah made a pony with mane and tail.  And then there was Mermaid Island playing, a cooperative game.

They played in their world populated today by Lego creatures and landscapes.  They spend quite a bit of time deciding what kinds of pieces to use for what.  Here I think they are looking for parts for a dog they are going to make.

Gavin and I played Chess.  We finished two games and then Lilah wanted to play with me.  In the game with Lilah there was lots of knocking pieces over on purpose along with explaining how different pieces move.  Gavin’s gotten a whole lot better than last year at anticipating moves and seeing possibilities, but our games are still very lopsided.  I will often point out to him that he’s moving into a dangerous position to help us both enjoy it more and give him a better chance.  I have many fond memories of playing Chess when I was younger and often feeling quite frustrated by my own abilities not being what I wanted them to be.

Gavin requested again that we get No Stress Chess which is a set of cards that levels the playing field by telling you which piece to move every turn.  I definitely think it would be fun to do that with the kids when they are just beginning to get the idea of the game. 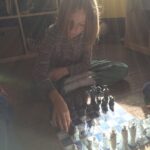 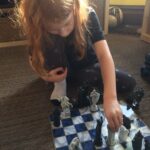 Then it was time to go roller skating.  Today the kids both skated on their own for about a half hour before wanting the balance supports the rink offers.  They are doing great but I think they get tired and then prefer the supports because it’s more fun to worry less about falling.  Pretty soon they’ll be zooming around me out on the rink.  They’re getting close!  We like to give high fives as we skate past each other. 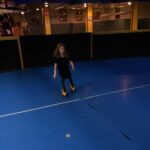 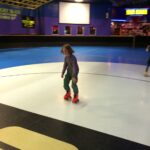 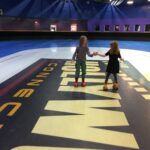 After skating we came home and had dinner together and then read another chapter of Searching For Dragons before bed.