The kids set up a lego restaurant with dishes, tables, customers and a menu.

We watched a crew clean our street and then cover the cracks with tar.  I asked the kids why they thought they cleaned the street first.  Lilah said, “To get rid of the dirt”. Gavin added, “Because it wouldn’t stick with the dirt on it”.  Then we talked about what happens if water from snow gets in cracks in the road and then freezes (and expands).

We worked on some Makit plate designs for holiday gifts.  They will make plates with the designs the kids draw and color.  The ones from years past are some of our favorite plates to use around here!  Gavin drew an owl with wind, tornado, crown and jewels.  Lilah drew several cats.  They both have a particular interest in those animals right now, which is fun. 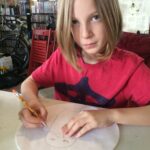 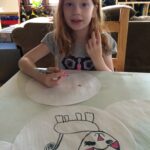 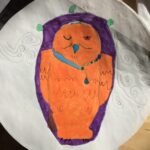 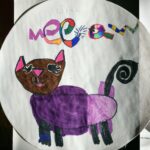 Gavin and I solved a sudoku puzzle with his Chocolate Fixx set while Lilah was still working on her drawings. 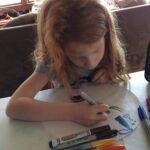 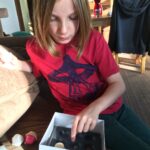 When she finished we played a game of Magic The Gathering.  It’s a very complicated game and not really something Lilah can grasp fully, or even Gavin for that matter, but they enjoy playing it at the stage they are at now and it has so much to think about: math, strategy, order of phases in your turn, lots of new vocabulary, art on the cards. 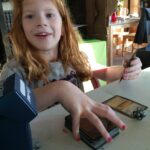 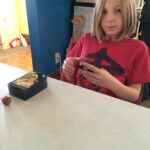 Lilah and I drove over to her gymnastics class

while Gavin stayed home and built a lego spaceship and watched an episode of Cosmos: A Spacetime Odyssey.