We are home and back to our routine (if I can call our go-with-the-flow days routine) after a wonderful visit with family in Washington over Christmas filled with jokes, hugs, games of all varieties and lots of good food.  I asked Lilah if she was happy to be home and she said, “Yes, because my green bean bag is at home and I LOVE it!”  It was one of her solstice gifts from Chris and I and it is indeed well loved thus far.

This morning Lilah slept in after being a bit sick still and a long, long drive back from Washington Saturday- Sunday.  Gavin and I started making pancakes and then when she woke up she helped too. 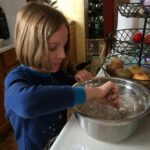 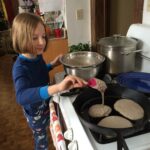 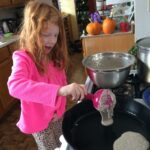 They played with their new lego set and their old lego sets.  They acted out some scenes from Harry Potter and used various lego people parts to make a Dumbledore.

Lilah got out her window suncatcher set and we peeled off the butterfly she made before we left to put on our window.

It looks very bright with the snow coating everything gray and white outside.

While I went outside and shoveled snow from our steps and sidewalk, the kids played No Stress Chess together – a variation on chess where each player draws a card before playing each turn that tells her/him which piece to move (and also illustrates the way each piece moves).  It makes the game more accessible and more random and they both seem to be really enjoying it.

After several games, the chess game evolved.  Animals were added, with new powers.  There was a borrower who borrowed things.  There was a story-teller.  I love watching them create together.

Gavin played with his Praxinoscope animation kit.  It spins and the pictures go around and if you look through the opening on the side it looks like a moving animation of the individual images.  In Gavin’s words: “It has a mirror that reflects the pictures from the flat part.  The (view piece) is rectangular so it blocks out the other pictures and you only see one.”

We read some poems by Liliane Moore and Sudeep Sen.

The kids set up Lilah’s new Wildcraft game, a cooperative game about herbs, particularly healing herbs and started a game but didn’t get far before dinner time.

I read some more of a new book called Madame Pamplemousse and Her Incredible Edibles by Rupert Kingfisher.  I thought it would be perfect for Lilah and got it for the trip to Washington and we’re in the middle of it, having started reading it up there.  It is charming and empowering story of a girl who likes to cook.