We played with MadLibs and were all enjoying it very much until Gavin wrote something wrong twice and there wasn’t space left to fit it in and got really upset and decided to take some time on his own.  I am happy that he’s beginning to develop strategies to use to deal with situations he’s having difficulty with. 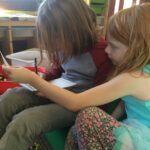 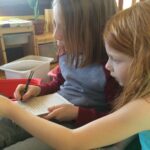 They built with Gavin’s physics set.

They built with Magformers.

We played at the park.

Lilah and I did some yoga.

We tried a new kind of flour in gluten free bagels: cassava (which is the same thing as tapioca except it includes the whole root). 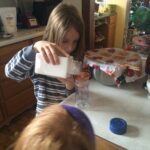 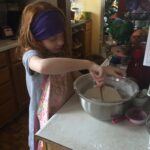 Bagels have a lot of steps. When we put them in the simmering water with sugar, they dropped the bottom and then slowly floated up to the surface. Gavin tasted the water, realized it was sweet and asked if it was the same as what we put in the hummingbird feeder. I told him, “Yes, pretty much except that doesn’t have flour from bagels in it.” 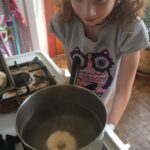 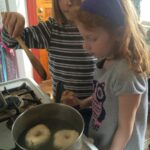 The kids each sprinkled their own bagels with poppyseeds, then we put extra cornmeal and poppyseeds on some and left a few plain.

They came out a bit gummier than I’d like, but everyone else was pleased. I’ll try without psyllium husk powder next time. This time I added it in case they started coming apart in the water, like they did in our last bagel making attempt.

We watched Nausicaa of the Valley of the Wind together. It’s one of our favorite Hayao Miyazaki animated films. Lilah is very drawn to the main character who works to bring peace, understanding and respect of all living things about.

All four of us walked over the local school playground, kicked the soccer ball around and played on the playground. 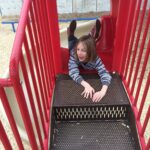 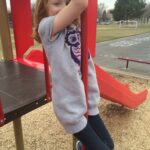 The kids and Chris went to scouts and made kites and crowns while I had some time on my own. It was good for everybody.