Gavin has been watching/listening to the google doodles lately.  Today he informed me that today’s “google thing” was about “how girls are as good and the same as boys”.  Thanks, Google!

They rode and walked to the park with my sister for some cops and robbers games.

We had a friend over and played with Legos and marble runs and cars.

Lilah made a beaded necklace to give a friend.

Gavin wants to write a book about Castle In the Sky so he was practicing the lettering from the front cover this afternoon.

Lilah has been picking bouquets from the yard to enjoy inside.

We spent the day in a city an hour or so away, buying a new to us car.  The kids and I spent most of the day at various parks. 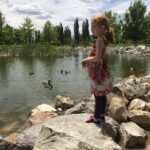 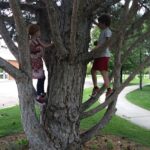 We had a conversation inspired by a coupon saying “Save 20%” so we talked about what that means, how much 20% of $100 and $10 is and if it’s a small or large amount and if it’s worth doing.  The kids decided it is worth using.  Since it’s for the bookstore, I agree!

We visited the aviary and saw the sandhills cranes with an egg!  We got friendly with a parakeet and ran and explored and reveled. 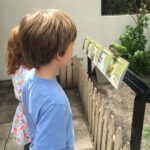 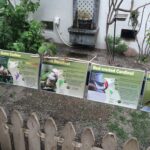 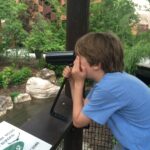 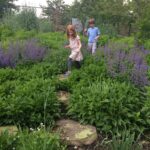 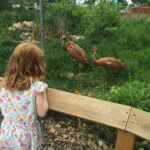 We went swimming.  The kids have been asking about going to a waterpark and we’ve told them that we’d love to, as soon as they can swim.  So, they’ve been asking and asking to go the pool and work on learning to swim.  In some ways, this is their first Big Unschooling learning goal.  So, we went and I found some simple games to develop the skills needed in swimming and we worked on those for a half hour or so and then they went down the slide and played.  But, they both made some nice progress and I think if we keep it up they’ll happily be swimming soon, without me scaring them or forcing things along.  Woohoo!

We went to the library again, this time to try to find a specific book Gavin has his heart set on reading: Galaxy’s Most Wanted by Jon Kloepfter.  After a computer search we found it yesterday and he’s now finished with all 208 pages (the next afternoon).  Lesson for me here is: let the kids choose their own books when possible.  Wow! 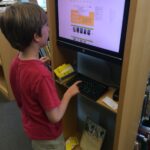 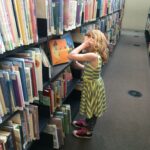 Gavin asked us who the main character in Mrs Piggle Wiggle’s Farm is.  What a great question!  I am so impressed by his interest and the fact that he shows a lot of nuanced understanding, asking this because the book has a different main character in each chapter, so it’s really different than most literary situations.  So, we got to talk about how usually the way you can recognize the main character(s) for sure is by the changes they undergo, as a character.

A week after we went swimming the first time, we went again. We did more of the same little games to work on swimming skills and both kids absolutely amazed me!  Lilah is just about able to swim all on her own and Gavin is nearly there and determined to work at it.  He’s able to float now, which means totally relaxing in the water and trusting his body and Lilah is willing to put her whole head under the water to propel herself, over and over and comes up with a huge grin on her face.  I told them both they looked like dolphins and they were so, so proud of their progress.  Woohoo!

Gavin’s been doing soccer games and practice three times a week and has been working hard on his defensive skills.

Lilah’s continuing gymnastics once a week and is getting better at hand stands, cartwheels and is beginning to work on round offs.  She’s gained a lot of strength in the past few weeks and is more and more able to pull the moves off.

More and more the kids are telling me what they are interested in doing with their time, like Gavin told me he wants to do more science experiments and Lilah has been asking for time to draw (cats mostly) and color (mandalas mostly).  I’m excited about these developments, as my own reflections on learning are that it’s most beneficial when it’s something chosen and pursued by the learner (with help and encouragement often, of course).

Every day we are working on how to make decisions about our time together without conflicts, and how to deal with conflicts when they come up.  It’s a work in progress.