We went up to play at Red Butte Garden. 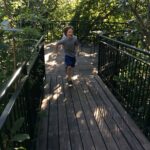 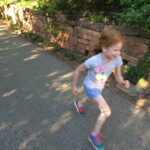 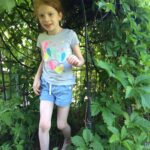 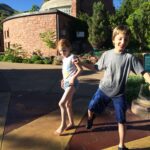 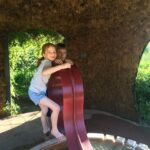 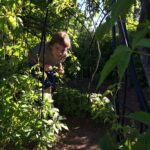 After really enjoying some picture books we checked out of the library with a raven character who says, “Nevermore”, I read Edgar Allan Poe’s poem The Raven to the kids.  Here’s the first stanza with the raven quoted:

Then this ebony bird beguiling my sad fancy into smiling,
By the grave and stern decorum of the countenance it wore,
“Though thy crest be shorn and shaven, thou,” I said, “art sure no craven,
Ghastly grim and ancient Raven wandering from the Nightly shore—
Tell me what thy lordly name is on the Night’s Plutonian shore!”
Quoth the Raven “Nevermore.”

They enjoyed it, though I’m sure there was a lot of they didn’t grasp.  I don’t worry about that very much as long as I think (or find out) that they can enjoy things on some level, if there is vocabulary or concepts too advanced for them, all the better to be exposed now.  I’m sure they can catch things I can’t because my brain is too busy with the fancy vocabulary and tricky abstract concepts.  It was fun for them to know that the character in the picture books came from that poem.

Gavin and I played Ticket To Ride and he won, after deciding to change strategies toward the end of the game.  He even built the longest route!

Lilah painted over her glue resist design.  And added salt. 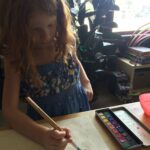 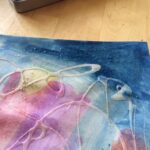 They read Fox In Sox together.

Lilah worked on walking backward on the beam (among many other things) at her gymnastics class.

At the park, they climbed trees.  This is happening all the time recently and it’s new.  I’m not sure why they never had much interest before but they sure do now and I’m so glad. 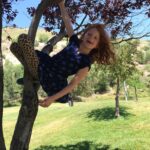 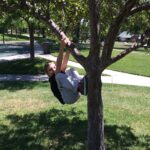 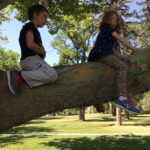 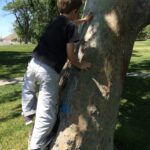 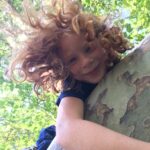 We tried out our new sun umbrella (necessary for all those summer play times at parks with no shade) and the kids staked it down.

The kids vacuumed the car.

We visited a recycling center and took a tour and brought some recycling items with us.  I learned a lot about how hard it is for many things to be recycled.  The take away was compost, don’t use plastic bags, and don’t use styrofoam.  We’re already fairly aware of materials we use and trying to use less and recycle/re-use more but we can improve here and there. 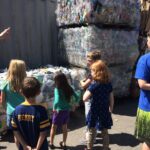 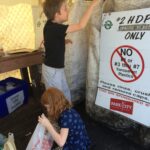 We went geocaching, with friends this time and had fun but didn’t find the cache.  We thought we found it once and were very excited but it wasn’t the cache.

I’m going to have to go back myself and look again if the kids don’t want to.  Maybe I will scout out some caches ahead of time to bring the kids and our friends to so we have better luck, at least until we know what we’re doing more.  A GPS unit other than my phone might help too.

A friend came over and they made up stories with lego characters and made designs with pop beads.

We took a weekend trip to Bear Lake.

Chris and the kids haven’t been before and it’s been years since I was there.  It was beautiful and fun, though the water was pretty cold beyond the sand bar it was very warm on the shallow sand bar protected side.  There were lots of tiny snail shells and clam shells, pelicans and killdeer, other waterbirds I couldn’t name. 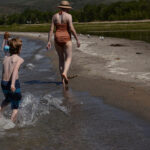 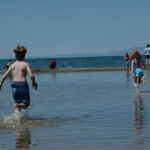 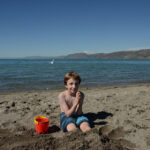 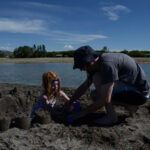 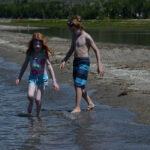 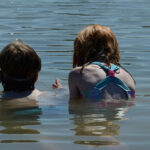 Maybe we’ll make another trip there later in the season.  As Chris said, it’s not nearly as satisfying as the ocean, but it’s pretty enjoyable anyway.  We talked a lot about how lakes and oceans are different, especially tides and waves and animals, because the kids were really fascinated on the way there trying to picture Bear Lake when they have most beach experience in California.

We have a trip to the ocean planned later in the year though.  I can’t stand the idea of not visiting the ocean at least once and the kids apparently feel the same as they’ve already begun asking over and over to go.