Gavin learned to ride a bike several years ago through a rather grueling process where I would squat and run behind him while holding his bike up while he practiced peddling and balancing. I tried holding the front instead and it didn’t give him the control and independence he needed to progress. It was scary for him, though less scary than trying without me holding the bike. It took several weeks of that and he got it and has been happily biking since. I have at least once or twice referred to that process as the worst part of parenting because of the amazingly awful pain of running while squatting and holding up a bike with a biker who’s going at good speed. It’s seriously not a good time, though of course worth it for the fun of the kid being able to ride.

Lilah has been riding on training wheels for years and last summer I thought she was ready to ride without them and we tried a few times the same way but it was hard and scary and neither of us were very motivated to keep going.

The weather has just turned the corner on warm enough here to want to be out and so I decided to ask if she’d like to try a different approach that my sister who is practically on a bike most of the time suggested. Lilah kept her feet off the pedals and just pushed along and balanced. She was comfortable with it because she could stop whenever and go as slow or fast as she wanted. It was tough going up hills and not very practical at first even on flat ground but she really started practicing going down a gentle hill at the park by us. Today she begged to go “balance biking” and so we all went and halfway through she started putting her feet on the pedals and going! 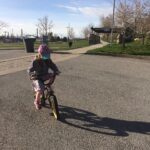 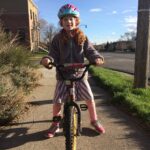 She’s so proud and I’m so excited about bike trips together and I’m thrilled that we figured out a less scary way for her to get the hang of it!

Biking and picnics here we come! Gavin asked me to take this picture of his “proud my sister can ride a bike face.”