We’ve been so busy this summer! It’s one of those things I struggle with; finding a balance between enough time with friends and things to do and enough time to sit, relax, wonder, read and be at home. My personal inclinations are often along the lines of more time unscheduled at home but since we’ve been forming new friends and community we’ve been doing so many things to facilitate that. Sometimes I am tired of doing so much. Always I am grateful for the opportunities we have to go out into the world and spend time with people. Many weeks I am thinking about how much to do. I think we will speed and slow with the weather and seasons probably, as well as what stages the kids are in.

Here are some of the fun things we’ve been doing.

We spent a weekend at a cabin in the mountains with my parents and some moose and the best swing in the world. It was quiet and the air smelled like pine. Mmmm. I dream of a time-share in a cabin in the woods, in the desert, by the sea.

I found a new favorite toy: an app on my phone called prisma that alters pictures into new, artistically styled versions. The kids love it too. Yesterday Lilah spent a good 45 minutes filtering on photo over and over. 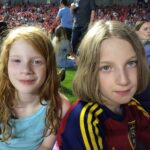 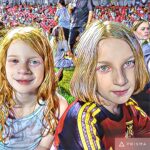 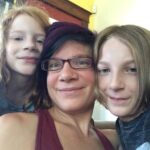 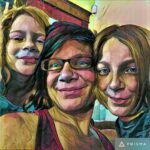 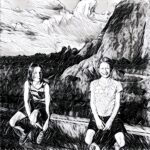 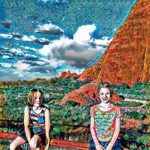 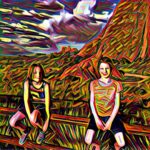 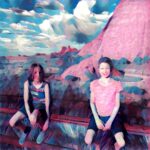 We went the local aviary and visited with lots of birds in exhibits and also a few there of their own choice. There were some barn swallows hanging out in the bathroom building, one on the hinge and some others in a nest in the back. This is the bird Gavin wanted a photo of.

We took the kids to some MLS soccer games, one with fireworks on the pitch afterward. They enjoyed throwing streamers, chanting support songs and watching fireworks.

The kids and I drove up into the Uintah mountains to an area full of lakes and explored. There were salamanders in the lakes and water lilies, wildflowers and also lots of flies (which were quite obnoxious). There’s an area there where there is floating grass that will very slowly sink into the edge of the water if you stand on it so I showed the kids that. It was fun for me but they were nervous. Some of the salamanders were striped and some had frills on their necks. I’m not sure if there were multiple species or just different ages and sexes. The kids tossed rocks toward the lake edge and a butterfly kept landing on Lilah’s skirt and trying to find nectar. 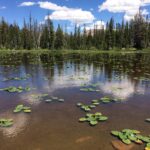 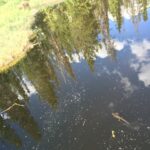 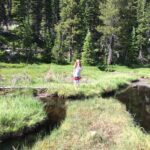 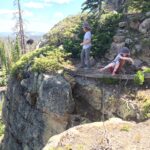 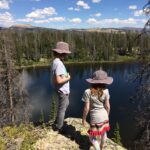 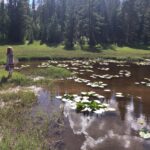 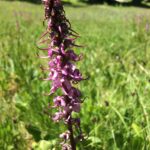 Some of the salamanders were striped and some had frills on their necks. I’m not sure if there were multiple species or just different ages and sexes. The kids tossed rocks toward the lake edge and a butterfly kept landing on Lilah’s skirt and trying to find nectar.

Here’s Lilah watching the butterfly coming to land on her skirt:

All four of us took a hike with the local unschoolers group. That was really fun to do with friends. The kids chatted all the way up and encouraged each other. Lilah and some friends tossed dirt in the air in puffs at the top. Gavin and Chris and I sat on the rocks and watched the water ripple under the wind and the chipmunks scurry around looking for hiker’s snacks. 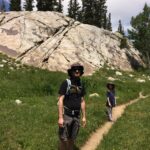 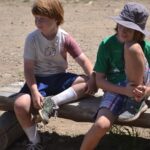 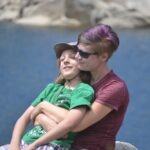 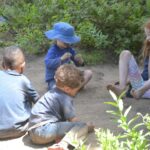 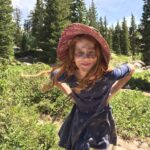 We’ve been enjoying walking and biking to our neighborhood library, checking out lots of books. The kids have both very much been enjoying various books of poetry by Shel Silverstein lately, which is really fun!

Lilah made this friendly looking cat…

that changes into this fierce creature!

We went to a farm that makes essential oils and watched their process and afterward visited a fish hatchery to hear about what they do there, which is grow and tend fish until they get big enough to release into lakes and rivers in the area. They had rainbow trout this time. 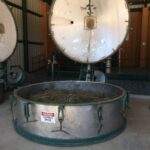 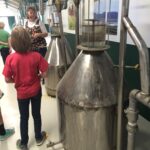 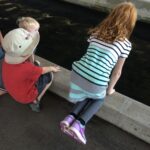 Lilah wove a tapestry, a Doodle Crate project. She loved it! I think there will be more weaving happening. 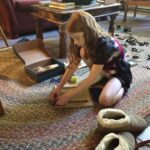 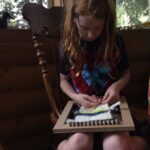 We tie-dyed with friends. We dyed towels and a shirt for Gavin, a dress for Lilah and a shirt for me. They came out beautifully! Well, except my towel which needs another round of dye. It’s hard to get enough dye into an absorbent towel tied up! The heart Lilah has been wanting to accomplish for years came out so nicely. Gavin researched techniques and settled on a “sunburst” pattern for his shirt and a “crumple” pattern for his towel. 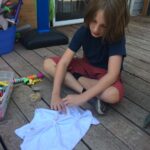 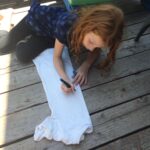 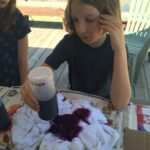 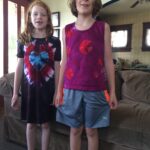 We’ve been playing Pokemon Go on my phone, walking to find pokemon and balls to catch them in, collecting pokemon, feeding them candy, evolving them. The kids have been interested in pokemon for years so they are pretty excited about the game. I get to ask them all sorts of fun questions as we play. We figured out the different types of pokemon you find have to do with the local terrain, like water pokemon are near lakes, ice pokemon in cooler places. Here’s the first one we caught and a favorite: