We headed over to the redwoods forest and the beach in Northern California.

The salt flats of Utah are on the first leg of the trip and we got out to see for a few minutes. It looks like snow but it is all salt and it is hot out there!

Our campsite was in the redwoods. It was cool and beautiful and so, so green. We even had banana slug and millipede visitors along with sweet singing birds. After 95-100 degree days in Utah, it was lovely to have mid 60s weather there.

The beach we love nearby was closed due to landslides on the trail so we had to adjust our plans. We headed to Crescent beach for some walking and shell collecting. 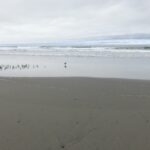 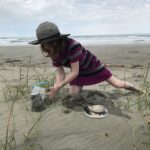 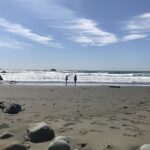 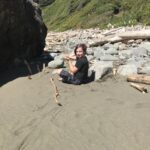 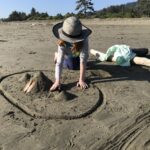 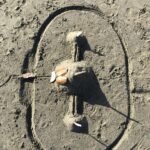 We really wanted to do some tidepooling so we found a few other possible places and tried one out the next day. The area the rangers were setting up was very slippery and hard to maneuver and we couldn’t find much of interest besides the most common shallow critters like anemones and crabs so we headed to the other side of the beach and we found sandy pools that Lilah could easily get around and so many fun things to see!

There were ochre sea stars in a rainbow of colors

and another kind I’d never seen before except at the aquarium which some research indicates may be a blood star.

There were crabs, both hermit and bigger.

There were barnacles and limpets and mussels and anemones and snails.

There were several types of fish.

There were nudibranchs! We found lots of one type with orange tips and one of another that was beige, flat backed with dark brown polka dots.

There were baby sea stars!

And best of all, we even spotted a small live jellyfish flowing in the currents

I spotted the otter in the ocean looking at us and then as I yelled, “It’s an otter! Loooook!” it swam up toward the beach near us and then galumphed up, rested, then galumphed more into a pond up at the top of the beach where Gavin spotted it! We think it was a river otter.

Here’s the “I just saw an otter!” face on Lilah:

And here she is, looking at fresh otter prints.

We hiked to Hidden Beach, a beautiful walk with wildflowers, ferns, views of the ocean below, a few seals sunning themselves far out on the rocks. 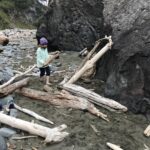 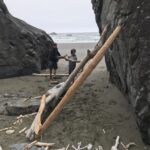 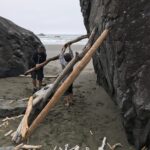 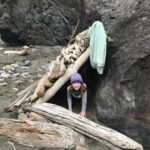 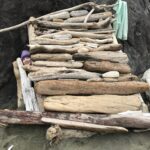 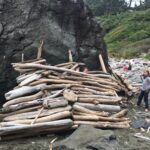 We spotted more amazing animals during low tide there too. Here’s a limpet that had come off it’s rock. 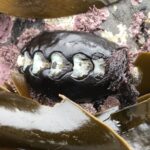 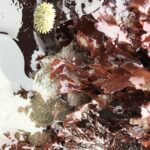 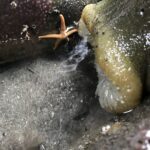 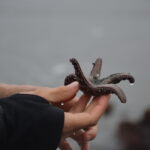 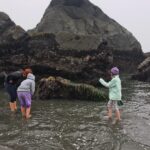 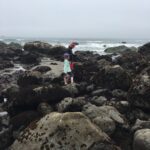 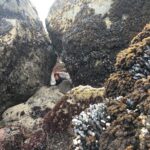 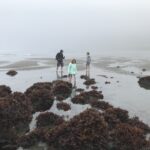 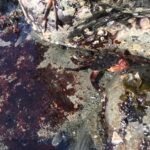 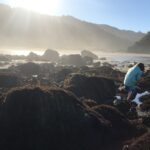 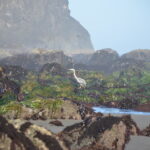 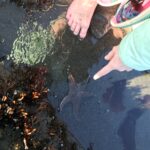 A couple of things I’m still working on figuring out what they are:

these orangey red blobs, which were further down in the tidal zone, which look like they may be red ascidians (commonly called sea pork) which the nudibranchs above particularly like to eat

and this, which may be a tunicate, but I’m not certain.

We also did quite a bit of hands-on (feet on) research about which seaweed types are slippery, or good for gripping while maneuvering through wet rocks in the tide pools.

In between our beach fun, we played Hero Realms, Yahtzee and Dragon Farkle, roasted marshmallows, explored the campground and while driving we listened to The Land by Mildred Taylor, a book about race relations and a young man with a white father and a black mother finding his way in America right after slavery ended, some short stories and The Land: Founding by Aleron Kong, which is a role playing game themed series with some crude humor that I’d prefer was left out but otherwise is quite entertaining. 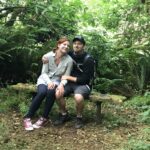 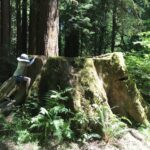 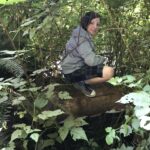 It was a wonder full week.