We adventured out toward the Great Salt Lake with friends. We stopped at Golden Spike Historic Site, where the transcontinental railroad completed it’s route across the western U.S. They brought out the two engine cars and we got to see (and hear) them driving along the tracks.

Spiral Jetty is not too far from there, out on a dirt road. It’s a land art piece that is at the edge of the lake, except with current drought conditions it’s about a half mile from the water line. The kids enjoyed walking the spiral path and looking for lizards who love to sun themselves on the dark volcanic rocks there. 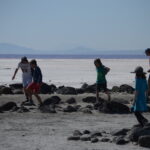 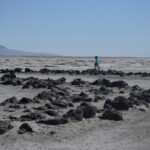 The Great Salt Lake is very salty indeed there, so much so that the bottom of the lake is huge, hard crystals of salt that are tough on feet. It’s pink from the halophilic (salt loving) bacteria and very beautiful and strange looking. The pink waves and white land is so striking! I dug out a few crystals while I was walking around.

They make for sharp stepping and cuts and scrapes.

In a few places there was foam from the waves which was also sparkly with super high salt concentrations. Fascinating!

The kids enjoyed it until the salt began bothering their scrapes and cuts and stinging. 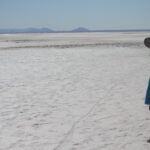 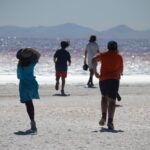 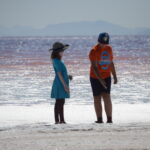 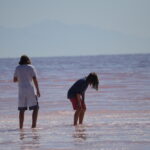 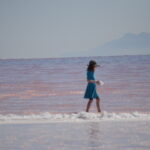 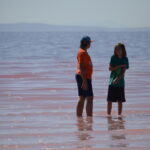 We even spotted some more wild horses!

Afterward we stopped at Willard Bay on the way home which is another part of the lake but is very much less salty so better for swimming. We washed off the salt and the kids played games in the water until it was undeniably late and we headed home. 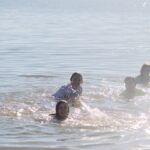 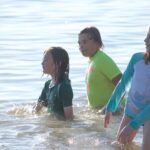 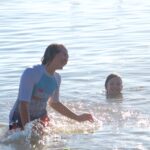