So we’ve been chasing a pictograph for the past few weeks. We had heard there was one spectacular image, all by itself, not too far from us but there is no sign, no trail and only a few clues to help people discover its location. It goes by the name Red Warrior and was created in a Fremont style and is amazingly well preserved as it’s protected from sun, people and a lot of weather as well, being on a cave wall. We’d been comparing images of nearby landmarks and following hunches and general directions which led to many fascinating spots and moments but this time, we found the pictograph! Success is sweet especially after sleuthing and lots of hard work hiking and checking every cave (which in this area means a LOT of caves).

Here’s a fossil covered with lichen we found on the way up and a view from the mountain we scaled. 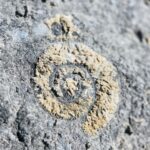 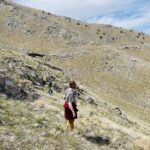 We found the warrior and it was spectacular to see in person. It’s marked in dark red ochre paint, with no known other similar art in the area. Fascinating! We wondered about its origins and about the people who passed through or lived in these areas long ago. I was so, so excited to finally find it! 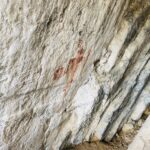 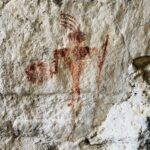 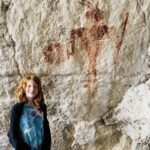 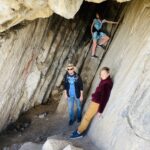 On our travels we spotted two ravens nests and a hawk nest. The bugs are beginning to get bad so I don’t know if we’ll make it out there again until they die down but it was fun.

On our way home we spotted two owls, a pair we imagine. The kids initially thought they were burrowing owls because the first one we spotted was similar colors and small in size. We took some pictures and Gavin identified them later as short eared owls with his books. One of them flew right over us! 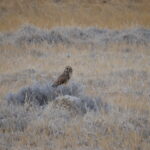 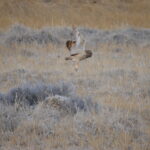 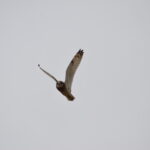