There was ninja character play with legos.  “Wheeeeoooooo, wheeeeeoooooo, ninja alarm!”  “And then Kai sat here to control his spaceship.”  “But he can’t see if he sits there!”  “Well, but it’s much easier to control it if he’s sitting here.”  “Mmmhmm.”

We spent some more time on the puppy puzzle.  Then we played a game where I draw something and make a speech bubble with an unfinished statement and the kids fill it in.  Today it was a sasquatch speaking to us.  The kids like it plus I get to draw! 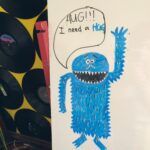 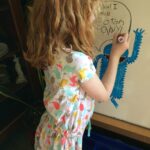 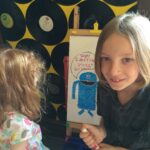 Then the kids built with legos while I read a few chapters of Juniper.

Lilah looked through a National Geographic magazine, pored over the pictures.

Lilah and I played a round of Rat-A-Tat Cat and then all three of us played the next one.

Next we were off to get a few new fall clothes for the kids and made a nice long stop to play in the fountains. 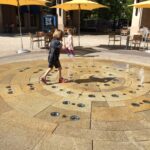 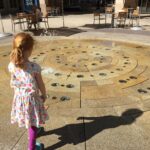 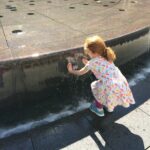 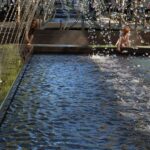 We came home and ate and then headed off to a co-ed whole family Spiral Scouts meeting to see what that’s like and if we’d like to join.  It was fun and good to be around a bunch of kids of varied ages including a few friends we know from school last year.  We enjoyed it and we’ll definitely be going again.