They worked a  bit on computer coding this morning with Scratch on Hour of Code.

Then there was Lego building and imagining.

Lilah read me an Elephant and Piggie book and Gavin read me Pete The Cat And His Four Groovy Buttons by Eric Litwin. 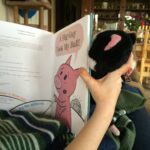 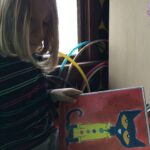 We went to the aquarium.  On the way we listened to a bit more of the Howl’s Moving Castle audio book.  One of the river otters was awake so we watched him swimming.  We saw sharks, shark eggs, shark teeth, crabs and urchins being fed.  We saw lots of cuttle fish, some swimming, some hiding, some almost invisible in the sand.  The octopus was awake but quiet.  We got to see an octopus beak today, from a deceased octopus.  It was only the size of the tip of my thumb but the person sharing with us said it came from an octopus bigger than the one they have now.  She showed us shark eggs and said that they lay them every day.  After that we looked closely and spotted the eggs in the tank with the sharks! 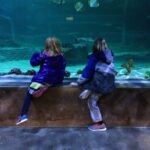 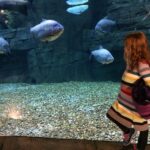 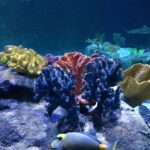 There was a huge blue crab who was jumping and dancing.

There were tiny black and white fish who’d just been released from their dad’s mouth after being kept safe inside for 21 days!

We visited the penguins and learned about what they eat and why their feathers looks more like fur.

I learned wood ducks are native to Utah and that they are called wood ducks because they nest in holes in tree trunks instead of on the ground.

We marveled at the huge river fish with scales that are inches across.  We watched the African Grey parrot preen himself and chatter, then squawk raucously when left alone.  While the kids crossed the rope bridge several times, I spotted as many rainbow colored frogs as I could.  Here are two: a  beautiful yellow one the size of a baby’s hand and a striped one the size of the tip of my finger.

When we got home, we worked out a few puzzles in Chocolate Fix, our sudoku puzzle set. 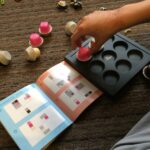 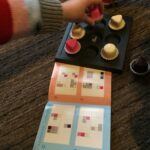 Then it was time for Gavin and Chris to drive to soccer and Lilah and I to do some salsa dancing at home.