They watched an episode of Peg + Cat and played with the train set first thing today.

The kids had a doctor appointment this morning so we hurried through breakfast (and I did my best not to knock over any train track that was meandering under the table and my chair) and took some books to read with us while we waited.  We started a new book: Matilda by Roald Dahl, one of my favorites.  The kids did well with getting immunizations, even though they were both nervous.  The nurse was fantastic at being fast and distracting them so they barely noticed.  I was quite possibly more grateful for her skill than the kids as it’s been really scary for them in the past and there have been many tears and pleadings on their part and worries on my part about having to just hold them down and get through it by force, rather than support and encouragement.

When we got home we finished the first chapter of Matilda.

They made pendants out of Legos to fit on the chains they got at the doctors’ office. 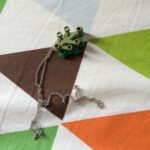 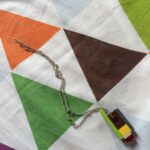 We watched an episode of Cosmos: a Spacetime Odyssey and learned about plants.

There was more train track building and loading the cargo containers up. 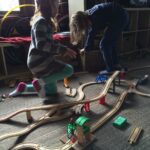 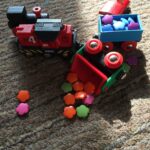 Lilah read me How To Babysit A Grandpa by Jean Reagan.

We drew together.  We took turns adding one thing (a shape, line, pattern, concept) to the paper until we felt done.  Maybe tomorrow we’ll add color! 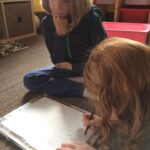 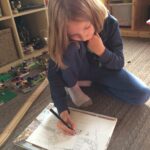 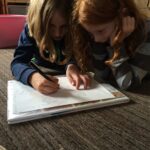 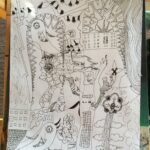 The kids asked to play Spanish games so they both took turns doing that.  They’re working on color names and days of the week still.

Gavin and Chris and I played a game of Magic the Gathering and Lilah was my consultant and die keeper. 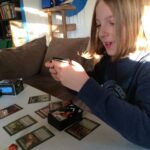 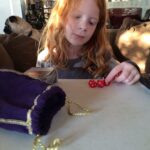 Then it was time to pop some popcorn for Spiral Scouts.

The three of them headed off to learn about computer coding (well, Chris probably won’t be learning too much, since it’s what he does for a living) while I stayed home to have a little time to myself and do some yoga.

Here they are coding!

While they were away I put out their pajamas, but I dressed a stuffed pony in Lilah’s and a stuffed panda in Gavin’s.  Lilah had made a sweet request the other day that I put their pajamas on their animals sometime soon (It’s something I’ve done a few times before to amuse us all) so I thought tonight was a perfect opportunity.  When they went into their room there was lots of giggling.