There was some coolmathgames.com time and then an episode of Wildcratts exploring Dolphin language and then, of course, legos.

I offered to help them start Gavin’s new crystal growing kit, but they wanted to play with legos first so I instead snaked our bathroom sink.  I despise plumbing but still prefer to do it myself instead of paying someone if possible.  This particular problem only took about twenty minutes of effort and now the sink is working well again so I’m feeling pleased.

They decided to work on some beading… taking apart some old necklaces and making new things. 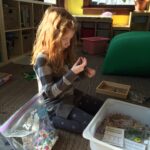 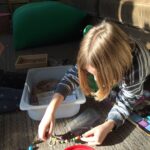 We opened a packet of Pop Rocks and sprinkled them in a cup of water; watched them bubble and pop and dissolve.  The kids didn’t want to eat them but were fascinated to watch and listen to them release their gasses.  We talked about carbon dioxide gas and then we ended up talking about the artificial coloring in the water from the candy and how there are natural sources of color for foods too. 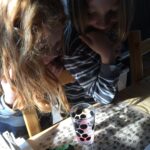 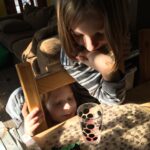 Gavin taught Lilah how to play Battleship with Chris’ old set.  “Tell me if F-6 is a hit and then put a red peg on the ship if it is.”

I went to the store to get some supplies for lasagna and some non-residue shampoo for me while the kids played Harry Potter Chess/legos/maze making.

When I got home they were ready to work on the crystal growing kit so Gavin read the instructions, measured out the water and stirred the crystal powder to dissolve it. 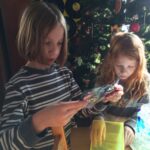 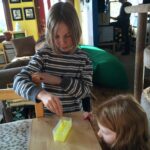 He placed the rocks and I poured it over them.  Then we examined it closely.

Then he had to read the clock and figure out what time it would be in an hour when he is supposed to sprinkle an additional pinch of crystal powder on each rock.  It took him a bit, but he got it.

They played some more Chess, this time with the Harry Potter Chess set, while they waited for the second phase of crystal preparation.

After that they worked on some more window art painting.

And then Lilah requested I read some more of Madame Pamplemousse to them before dinner and bed and snuggles and singing.