We went to the aquarium.  We saw lots of animals and tested out some new displays.  We spent quite a bit of time with the cuttlefish, observing them.  They are fascinating creatures, very curious.  They come right up to the glass to observe us and one even sort of puffed water at us several times.  We wondered aloud what the tube like part under their head does and I promised to check it out at home.  Later I found it helps to propel them through the water, along with their fin.  They can change color and release ink.  From watching them for awhile, it seems to me to be the spots on their skin that change color, not the underlying skin itself.  We know they like to cover themselves in sand and hide on the bottom of the tank, but today we only spotted swimming cuttlefish.  We also saw the Gentoo penguins, lots of sharks and unicorn fish and jellyfish. 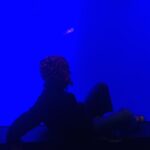 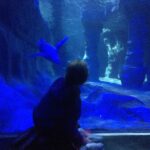 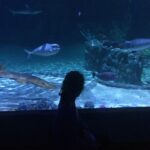 We listened to Harry Potter on the way to and from the aquarium and Gavin asked to watch the movie so we started that when we got home.

The three of us played a Magic the Gathering draft. Lilah and I were on a team since drafting is so complicated that I don’t think she could do it on her own.  She was disappointed but ended up enjoying it and then leaving partway through the game, which is about right for her attention span. 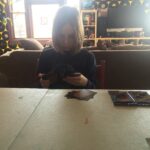 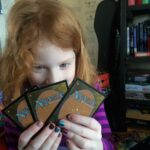 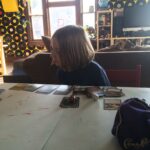 Lilah read me an Elephant and Piggie book: My New Friend Is So Fun.

We headed to Classic Center for some roller skating. The kids practiced skating in a crouch, stopping, turning and jumping.  I practiced not hitting small kids veering wildly on scooters while trying to enjoy skating.  Next time I think we’ll go earlier and avoid the crowds. 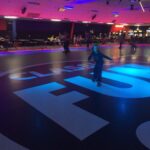 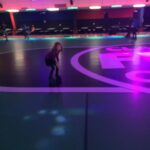 Lilah played some Spanish games with number and color words.  They’d forgotten many of the ones they had learned already but they came back fast.  In one of the games she has to spell the words so the visual learning kicks in there.

We got out the Math Dice and Gavin taught me how to play.  It was fun to practice our addition and multiplication.  He’s so good with numbers!

Lilah performed a Chapstick experiment wherein she tried all of her chapsticks together, layer upon layer.  It was hilarious and I told her she smelled like a candy shop.  She’s still a bit sticky.

The kids played Carcassonne with my sister while I went for a short hike and then they played with Legos and jumped on the beanbag. 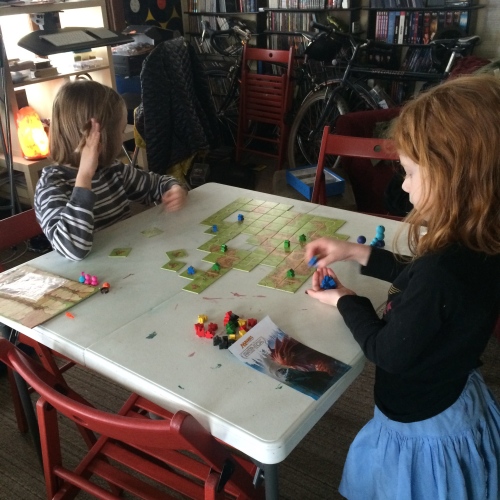 There was a soccer game in the hallway.

There’s always more fun to be had.  I keep learning that particular lesson, over and over!  It’s a good one.