Over the past week or so the kids have been playing Spore every morning lately.  So, the rest of the time the kids conversation is including evolution, mutation, tribes and herds.   (It’s a computer game where you start as a tiny sea-dwelling organism and slowly evolve and become a land-dweller.  You get to choose the changes, like type of eyeballs, type of feet, size of torso…, as you slowly level up and your creature changes and develops.)  Usually both of them are leaning together, planning what changes to make next, where to take their creature in search of food, shelter or allies.  Here’s Lilah in a rare moment without Gavin’s sage advice on hand.

Gavin built a Lego version of Carcassonne, complete with four civilizations, Japan, China, Vikings and Rome.  It has a volcano and a temple, four cities and a river that goes to the sea.  I’m impressed by his building, his creativity and his interest in geography, history and game mechanics.

We finished reading Madame Pamplemousse and the Enchanted Sweet Shop and are continuing Prairie School.

We looked at a bunch of slides with the new microscope as well as some feathers from our parakeet. 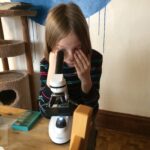 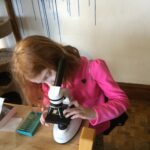 Lilah went to gymnastics.  She even went up to the high bar, the one up higher than my head, swung herself around and up and did her “mermaids” on that bar before swinging down and dismounting.  I was impressed.

We built my new single-serving puzzle. 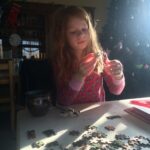 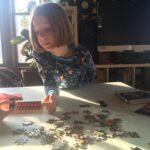 Lilah’s had a cough for weeks and the air has been really bad here so we’ve been staying in quite a bit.  Yesterday and today the air is finally clear again thanks to some rain and snow.

The kids have been playing with their Hero Factory modular robot toys.

Here’s a snippet of one of their stories:

G: “I’m following you Earth Leader. All right, Sandstone. Look this is the tricky part of getting down.”

L: “Yeah but remember Kai is good at climbing.”

G: “Yeah he’s good at climbing things but not slippery things like vines.”

“‘Let’s go to the new city of Earthler which I’ve never seen’, Kai admitted.”
L: “Look, she’s fireproof and waterproof!”
We talked about sales tax because Gavin has been doing chores to earn money and is interested in spending it on a new Bionicle figure.  We discussed how much sales tax is, why it exists and what its for in general and specifically here in Utah.  Then we began talking about when it started and got into the Boston tea party and representation of the people in governments.  It was a pretty great bunch of discussions!
We picked up our Spanish practice again, going over food words, animal words and I learned how to say, “You are so sweet my teeth hurt.”
Gavin finished knitting his hat on the loom.

Gavin asked recently about Atlantis, if it’s real or not. So I explained that actually there are plenty if cities that have sunk for different reasons and we don’t know if Atlantis is one of those.  Afterward we looked at some great photos of sunken cities and read the brief descriptions of where they are, when they sank and if they know why.  It’s been something that has interested me since I was a kid, so it’s fun to see Gavin interested as well.  I’m glad to know and be able to pass on that there are infinite mysteries left in history, biology, physics just waiting to be discovered and puzzled over.
We went the the Museum of Natural Curiosity and climbed and read and spun and wondered and built and laughed.  My favorite part this time was watching the kids dress up as pirates and put on a play. 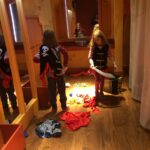 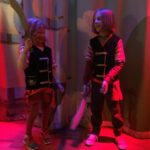