We camped this weekend in Snow Canyon. It was beautiful, though a bit less rain would have been nice.

We hiked and explored in Snow Canyon, in red sand and petrified dunes and twisting trees. 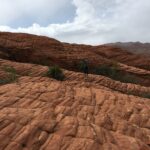 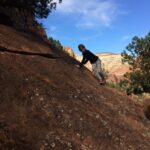 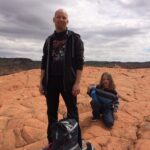 We played card games huddled under the awnings of the trailers during the rain storms.

The kids biked and scooted and dug in the sand and played soccer and found secret hiding spots.

We ventured into nearby Zion National Park for a day and went to weeping rock and then far out to where less people and trails are, to the Many Pools area. There had been so much rain recently and the snow is still melting so the pools were bigger, more and there were streams between most of them this time. We didn’t spot any frogs or tadpoles but it was overcast so much harder to see the bottom of the pools. 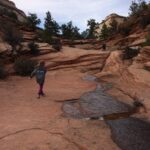 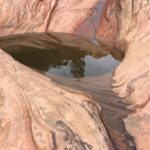 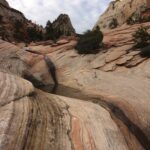 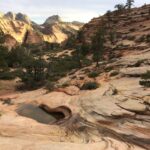 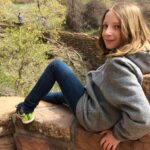 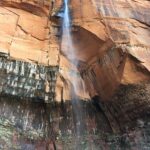 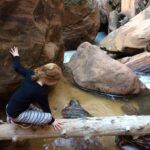 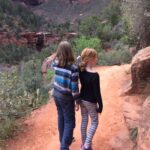 It was early for wildflowers still but we saw a few paintbrush and other flowers like this desert sage blooming already. The kids were smelling the leaves of various plants and deciding if they liked the scents or not.

The kids saw lots of sandstone and volcanic rock and were quite interested in how it’s formed and how different the volcanic rock is, smooth, rough, bubbly, pockmarked.

We all went out to dinner one night and Gavin lost his first baby molar! He was quite surprised.

On our last afternoon a few of us stayed later and found the lava tubes and climbed down into the caverns and then back out. It was really neat! We took flashlights, lowered ourselves into the opening and then descended into the dark tunnels and caverns below. It was dark down inside the caverns. We came out of a different hole nearby when we were done exploring.

Here’s the entrance we went into: 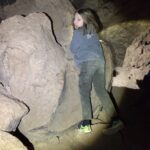 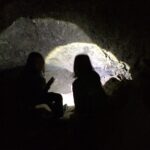 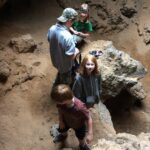 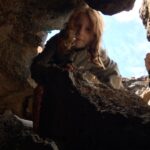 Someone on the trip asked Gavin what his favorite part of camping was and he answered, “Going new places that I’ve never been before and exploring.” His least favorite part was, “Being away from my computer.”

I asked Lilah the same thing. Her favorite part was, “Being with our family is most of it. Also exploring and climbing on rocks.” Her least favorite part was, “Getting in freezing cold water.” She kept walking in the wet sand after the rain and checking the temperature of puddles.