We signed the kids up for a sword casting class a few months back. It was so popular we had to be quick to get in but are so glad we did.

The teacher travels around with his equipment and teaches groups and he has quite a wealth of knowledge to share about metals, casting, history.

The kids each chose a sword from many different shapes. Lilah sanded her wooded sword. They used sand casting to create a mold for the metal. Each kid started with a special wooden box that comes apart multiple ways. They fill it with sand mixed with bentonite clay and a tiny bit of water, pat it down. 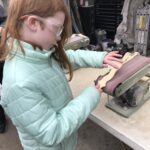 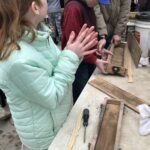 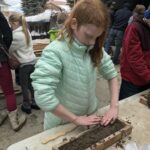 Then they put the wooden sword in and push it down with a flat piece of wood. 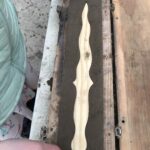 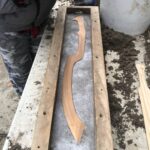 Next they sprinkle powder on top to stop the next layer of sand from sticking to the first.

Then they fill up the next half of the box, tamp it down really firmly, and put the lid on. They use a tube shaped tool to create a channel in the sand for the metal to get into the mold. 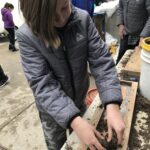 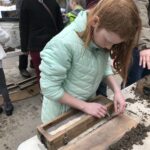 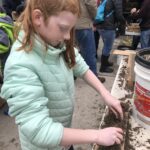 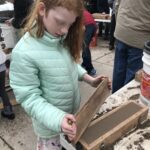 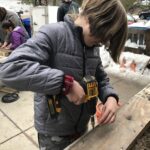 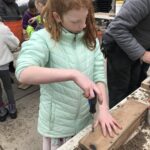 Next they unlatch the box, open it in half and carefully take out the wooden sword. That was a bit scary because all that holds the sand in place (to shape the all-important sword shape!) is your packing skills and the texture of the sand! Then they carefully put it back together and it’s ready for casting!

He used aluminum for the swords because it’s less expensive and lighter weight than other options. He heated it in a small foundry with propane and then poured it into each vertical box mold.

It cooled in about five minutes, then he opened them and took out the metal swords. 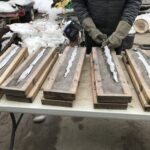 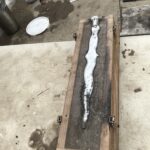 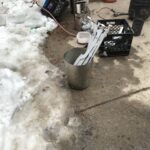 After that it was time to shake out the sand so it could be reused. I was interested in the difference in the sand that had touched aluminum.

Next they were ground, smoothing them a bit and removing extra ends from the pour channel.

Last thing was to wrap a piece of leather around the hilt. 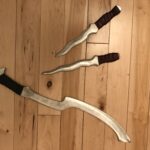 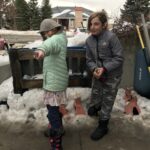 The kids were thrilled and learned so much and it was so great he had them do most of the process themselves.

Aluminum doesn’t occur as an ore naturally. The only time it does is when lightning strikes it in rock form and heats it. Because of this it was discovered much later than many other metals. Unlike many other metals, it just looks brown in its rock form. Napoleon had a set of silverware made of lightning formed aluminum that he let his favored visitors use. If you weren’t favored, you had to use gold utensils.

The criss knife is a traditional ceremonial dagger, originally from Indonesia.

The Egyptian kopesh is a curved, notched sword, used to hook and pull shields down and away from opponents so that you can reach them. They based the design of the Assyrian weapon that looks much similar but slightly smoother, which had defeated them while they used straight swords.