They began with computer play and Pokemon watching.

We watched the construction right outside our house and its’ progress, wondering about what would happen next.

Then we learned how to say good morning in German and Spanish: guten morgen and buenos dias.  And how to say and: und and y.  We decided to try an app to learn Spanish together on my phone.

There was lego play and we read another chapter of Wise Child.

We looked at flowers and plants and animals and talked about different kinds of symmetry.  Lilah drew a flower, with radial symmetry. 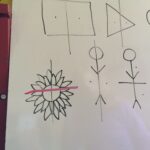 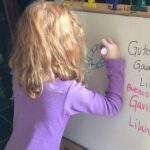 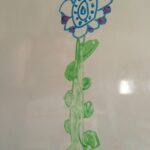 I asked the kids if they’d like to do some math and they said yes, so each of them answered a few questions on the whiteboard.  I was wondering if Gavin would remember the greater than, less than symbols.  He did.  He enjoys math very much.  It’s a language that makes sense to him and he especially loves story problems so I try to throw a few his way regularly.  I enjoyed watching his process of division drawn out.  It’s fascinating to see what way a kid approaches a puzzle that can be solved in so many different ways.  Lilah enjoys math puzzling too, especially patterns. 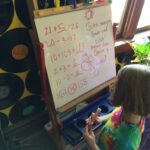 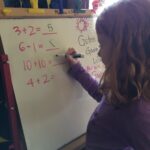 After lunch we looked up the weather on wunderground.com and Gavin wrote down info in his weather journal.  Then we discovered it’s a new moon so we took name suggestions and voted as a family on this moon’s name, inspired by our beloved teacher Leslee’s class the last two years.  Suggestions included: Kitten moon, Owl moon, Hoot hoot moon, Magical moon, Starlight moon, Magic moon, Meow meow moon, Squirrel moon, Woof moon.  We settled on Meow meow moon.  Some stuffed animals got in on the voting. 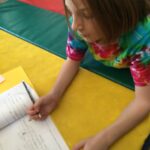 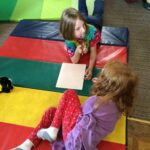 The kids worked on assembling our vacuum.  On a terrible, horrible, no good, very bad day last week our old vacuum broke beyond repair, so we were very excited to have and try our new one. 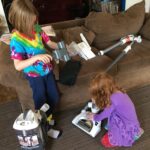 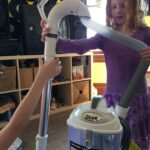 We tried out the Spanish app, Duolingo.  It was fun, though I’m not thoroughly sold on it being fantastic for young kids.  If we do it together it’s pretty accessible.

We took a trip to the library to return books and find new ones to read and came home with three armfuls, one for each of us.

Gavin immediately dove into a map book where you find treasure by using mapping skills.  After he finished he read about the other related books and requested we try to find them.  Lilah was very interested too and asked to read it on her own as soon as he finished. 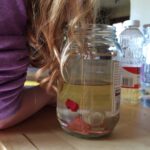 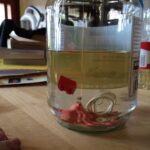 Lilah and I went to her gymnastics class where she practiced candlesticks, arabesques, cartwheels and handstands while Gavin played Civilization with Dad and then helped him with dinner.