They played with Legos and story told for hours, inspired by their many varied interests.

Lilah decided to try oatmeal for the first time for breakfast and enjoyed it with almond milk and honey.

We finished the puzzle we’ve been working on.

Lilah got out her stickers and played with them.

Gavin worked on a crocodile in flames, titled Sorry Crocodile! made with perler beads. 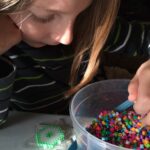 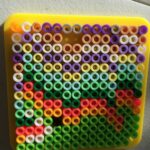 The kids made quesadillas (with Daiya cheddar as we are vegan) for themselves for lunch and Lilah cut some carrot coins for herself from one of the rainbow carrot bunch, a white one this time.

After lunch they wanted to do more perler bead crafting.  Lilah worked on a heart ornament with color patterns and finished it.  A year ago, it was too frustrating for her to do any kind of pattern in perler beads, with spills and the length of the process so she often gave up so it’s great to see her succeeding with that now.  She was thrilled with the results!  Gavin made an ornament next, with translucent and opaque beads. 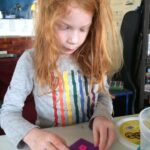 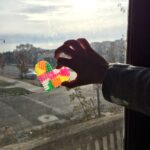 We walked over to the park to collect things to try painting and stamping with.  We found pinecones, juniper, some seed balls from the sycamores.  The kids helped me look for some round, smooth rocks for some holiday projects later.  As we walked home, they carried some rocks they’d chosen and they began galloping and clicking their rocks together, pretending they were in Monty Python and the Holy Grail.  (In the movie, knights who click the halves of coconuts together imitate the sound of horses hooves as they gallop on foot.) 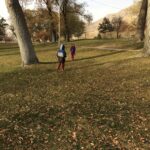 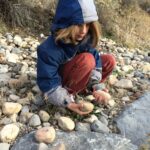 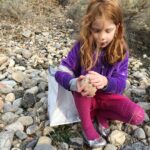 We got out the paint and paper and began painting.  Lilah painted for a long time and Gavin switched between painting and more perler bead creating. 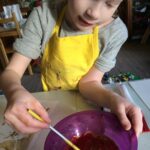 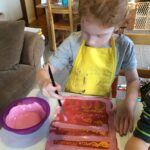 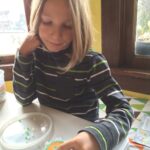 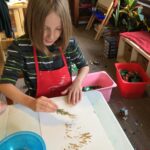 They admired each others progress and process.  I believe that our unschooling approach is helping all of us be kinder to each other, have more time for each other and generally be happier most of the time.  It’s not that we weren’t striving to be kind before, but there is most time and space for our interests and needs and feelings now, and that leads to being in a better place to appreciate other people and the world.  I am so grateful for kids who encourage each other!

“Mama, can we watch an episode of Cosmos?”  (Cosmos, a Spacetime Odyssey)  This episode was about the age of the Earth and how it’s been interpreted and determined through history.

We read several chapters of Matilda and then there were cuddles and songs and sleep.