We did some reading about and then had quite a bit of conversation about Michael Brown, the young African American man who was shot and killed by a Caucasian police officer and the lack of indictment decision yesterday.  I shared what I could find about facts as well as that there are multiple different stories.  It’s such a crucial concept to grasp that there are sides and different perspectives and more often than not they can all be “right” or “real” or “accurate”.  We talked about cultural privilege, who has it, what it means and the responsibility of caring for others.  I hope that talking about these things when they’re young means they’ll be more attuned to how they fit into the cultural world we all create together when they grow.

Lilah and I met her friend at school and then we came home to play.  While we were gone Gavin worked on computer coding.

Gavin and I looked at pictures from Rosetta and Philae of the comet 67P/Churyumov–Gerasimenko while the two girls did yoga together.

All three played together, dressing up and making up a story with queens, ninjas, frogs, cats and countless other elements.  After they exhausted that play they got out the hexbugs and made tracks for them to climb and race and scurry around on.  Almost all of our bugs were out of batteries so I used up the last six of our batteries and they scurried around like mad with full batteries. 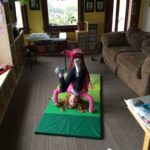 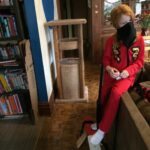 Lilah’s friend brought some of her hexbug pieces over to play and Gavin accidentally broke one as they are really tough to get together and apart the more you use them.  For me as a parent it was one of those awkward situations where I felt badly about it but didn’t want to make it into a bigger deal than the kids made it.  So later after talking with Chris we decided to offer to replace it, if that friend and her parents decided they’d like that.  We’ve often had our kids toys broken or messed up by friends and we figure that’s part of playing and learning how to share and it’s never been an issue but we wanted to make sure we cover our friendship bases, but not in an overly formal way that makes us less valuable friends (who can break each other’s things and go with the flow).

After Lilah’s friend went home, we noticed the pine cones we’d collected last week had opened and the seeds inside shake out.  The kids call them helicopter seeds because they twirl as they fall.

There is something so satisfying about being able to explore things over time, to notice changes, to come back and see what you saw last time and notice things that were there before but you didn’t see them.