We listened to Harry Potter in the car.

We did some more building. 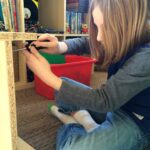 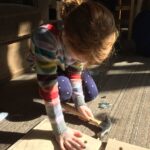 We used tea pot (our first ever!) for a green tea party.   We were all excited to try out our tea pot and the kids enjoyed trying green tea and peppermint tea and talking about all kinds of tea. 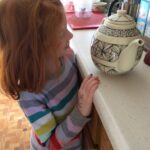 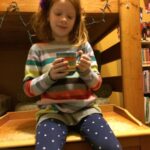 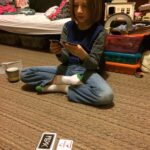 There was a game of Monty Python Fluxx.  Then we watched Monty Python’s Ministry of Silly Walks sketch.

We visited the Hill Air Force Base museum.

The kids enjoyed looking at the planes but ultimately both decided they didn’t really enjoy the museum.  It wasn’t terribly kid friendly.  I’m actually quite excited about this as I think it’s a great opportunity to try something new and then decide, oh, that’s not really my favorite.

Now we know.  There were a few planes painted with teeth which entertained Lilah and Gavin really enjoyed looking at a huge plane engine which was displayed with the ability to watch the gears turn inside.

Unbeknownst to me, Lilah had brought her stuffed animal with her from the car (where I usually ask that they stay) and we lost it in a network of huge warehouses two separate times.  Luckily we found it both times but it was frustrating and both of us need to make sure the animals stay in the car before we head out on an adventure.

The kids helped vacuum the house (it’s on our list of chores they can choose to do and get paid for) by choice.  We took the glass over to the recycling center in the park and then collected sticks and bark to build a fairy house as a birthday present for a friend.

The kids each painted a cork as a fairy and then we hot-glued some ribbon as wings on the back.

Then we started building the house, clipping sticks to the right size and hot-gluing those in a log-cabin style for the fairy house, finishing with an open bark door and bark roof and pinecone chimney. 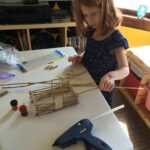 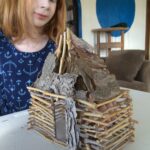 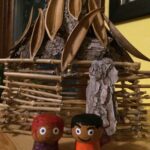 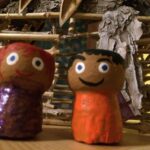 We stopped for a bit to watch as firemen arrived to put out a small fire nearby.  We got to see the ladder on the truck in use as well as their long hoses.

Lilah had a friend we haven’t connected with since the spring over.  It was so good for them to have time to play!  They explored the house, and then got out the marble blocks.  It’s always fun for me to see what different combinations of kids gravitate toward.

At the same time Gavin had playtime with his friend,and now pen pal, at their house.  He tells me they built a temple with legos, jumped on the trampolines, and ate noodles.

The girls dressed up as villains, made a haunted house, played dead, drew on the whiteboard, made a slide with the bean bag and gymnastics mat.  And giggled A LOT.

After both play dates had ended, we finished the roof of the fairy house, cuddled, read The Wizard of Oz and the Ranger’s Apprentice and then bed.